🧵 Our flags are durable 200D polyester (most flags you'll find on the internet are cheap ~75D). In our testing, we selected 200D as the perfect flag material; anything heavier doesn't fly well and the "back" doesn't get enough ink, anything lighter feels cheap and wont last very long.

🤝  The Flags For Good Promise: At the end of each month, we donate 10% of the sale of each of these flags to The Global Fund For Women. In the past, they have supported feminist movements and grassroots organizers to end civil wars, gotten female Presidents elected, and secured laws giving new protection to millions. They fund bold, ambitious, and expansive gender justice movements to create meaningful change that will last beyond our lifetimes.

Exactly what I was looking for - great quality.

I get questions about this flag all the time which spurs continued talk; truly a flag for good. 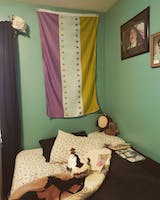 I love answering my neighbors’ inquiries and it has given me the opportunity to talk about ”universal” sufferage. I hung it upside down the first time but quickly fixed it. Thanks !!

In 2020, as the world was going to shit, Michael & Cassie started Flags For Good to raise awareness for good causes, donate a portion of each sale to those causes, and make more flags to put in the hands of change-makers like you!

Use this banner to inform customers about special features for your products, or various promotions like free shipping.