✍️  Morgan's Design Notes: Cryptids are weird & in weird spaces, non-normative orientations and identities feel less stigmatized. This can lead to a cycle where there start to be more and more queer and trans people in a space, further claiming it for those communities. And while there will be bigots in every cultural space, circles with “oddball” reputations tend to feel more accepting. I was reading a blog & the blogger put it in a great way— in the event that their identity is challenged in cryptid spaces, they feel like they can better defend it because they’ve got a built in trump card: “you’re going to tell me you believe in Mothman but not gay people?” the idea of homophobia and transphobia existing in cryptid spaces was absurd because those spaces are explicitly built on the premise of accepting things that “normal” society won’t.

A repossession and hijacking of the narrative that the LGBTQ+ community is malicious or just a cute woodland friend showing pride? You decide.

Absolutely love the flag. Never thought I'd find a Mothman flag, but then, here it is!

K
Kady
The man. The moth. The legend. The flag.

Love my flag! It arrived quickly and it's exactly as pictured. I haven't had a chance to hang it outside yet, but I hope it will last a long time. (Also, can you please make a Virginia flag? I'd like to have one of those too!)

I love this and my other flags I’ve bought so so much. Great quality

I've purchased a fair amount of flags and this one lands in the "OKAY" section with it's construction. My main issue is that the stitching down the sides is uneven which causes it to pull on the sides and not hang straight. Will check back on fading.
This was a 3'x5' single side printed flag. 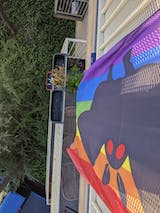