🏴  3' x 5' Nonbinary (Genderqueer) Pride flag with grommets and double stitched edges to reduce fraying. We tested many different materials and settled on 200D polyester as the perfect flag material; light enough to fly in a breeze but strong enough to last for years.

🖨 ↩️  We print this flag as a one-sided print and make sure that the back has ample (around 90%) bleed-through.

The flag was great quality and the colors were very vibrant!

i love it sm 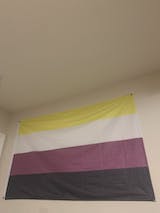 I finally felt confident to buy myself a pride flag and I love it. Great job/ high quality flag

In 2020, as the world was going to shit, Michael & Cassie started Flags For Good to raise awareness for good causes, donate a portion of each sale to those causes, and make more flags to put in the hands of change-makers like you!

Use this banner to inform customers about special features for your products, or various promotions like free shipping.