🌍 Designed by Oskar Pernefeldt in 2015 and now an international sensation, the International Flag of Earth is a proposal that is constantly gaining steam to be the first flag of our planet. Be a part of the movement and fly the flag to help in its adoption!

✍️ The Design: Centered in the flag, seven rings form a flower – a symbol of the life on Earth. The rings are linked to each other, which represents how everything on our planet, directly or indirectly, are linked. The blue field represents water which is essential for life – also as the oceans cover most of our planet's surface. The flower's outer rings form a circle which could be seen as a symbol of Earth as a planet and the blue surface could represent the universe.

As we prepare to step foot on other worlds it is nice to have a flag for your home planet!

R
Richard Sheng
One of a Kind

This is an intriguing flag that I'm proud to fly.

This flag drapes well, seems quite durable, and is well designed. It's a subtle yet meaningful, unifying flag that is pleasing to the space around it.

We are so happy to have found this amazing company and their flags for good!! We love our earth flag!!! Humbly flying it here in a rural county of North Carolina. ❤️ We’ve also shared the website with loved ones who are ordering more flags! Keep up the good work!!! 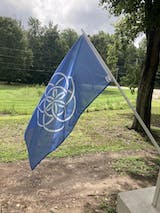